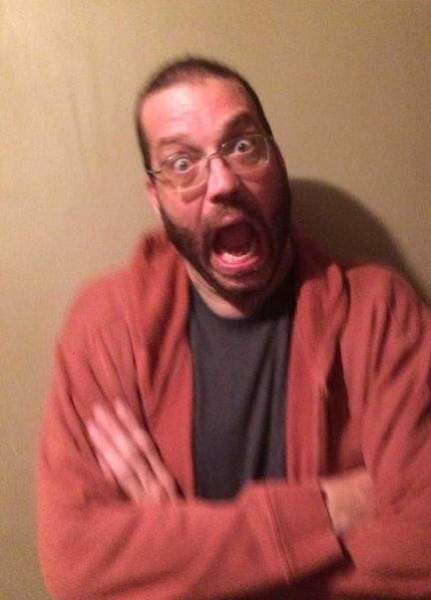 He was able to do what he loved as an Art Professor at Ivy Tech, IPFW, ITT Tech, University of St. Francis and St. Charles School. Currently he was a painter for Indiana Signworks. He had a passion for art and loved the people and four legged friends in his life.

He will be sadly missed by his wife, Kristine (Heyerly) whom he married June 8, 1996; parents, Louis & Judith (Seaman); sons, Zackary & Maxwell all of Fort Wayne and siblings, Jill (Brian) Lepper of New Haven & Kenneth (Gayle) of Leo.

His funeral service is 11 AM with viewing one hour prior on Monday, May 21st at St. Joe Community Church, 2900 N. Anthony Blvd., Fort Wayne.

He will be laid to rest in Harlan Cemetery.

In lieu of flowers, memorials are to Cancer Service of NE Indiana or Soaring Hawk Raptor Rescue.

Described as caring, compassionate, and selfless, Allen Etter touched the lives of so many around him. He was a man of many gifts and talents, but he was a humble person who used his abilities to help others uncover the best in themselves. Allen was blessed to share much of his life with his true love, and together they were blessed with the children he adored. A man of faith, his life exemplified what it means to be a man of God first and foremost. Life will never be the same without Allen here, but he leaves behind a timeless legacy that his loved ones will proudly carry on in his footsteps.

The 1960s were an exciting time in America. Televisions brought us shows like I Love Lucy and Father Knows Best, which gave us very diverse definitions of the American family. Civil rights were in the forefront of the issues we faced as a nation, and by the end of the decade we had successfully put the first man on the moon. Amidst this exciting time was a time of great excitement in the lives of Louis and Judith (Seaman) Etter were eagerly anticipating the birth of their new baby as winter held the city of Fort Wayne, Indiana, firmly in its grip in February of 1967. Their wait was finally over on February 21st when the baby boy they named Allen drew his first breath. He was the middle of three children as he was raised in the family home alongside his older brother, Kenneth, and his younger sister, Jill. Allen’s father worked in engineering at GT & E in Fort Wayne while his mother had more than enough to keep her busy at home.

In many ways Allen was a typical boy of his generation. He was creative from the time he was a young boy as he loved drawing, painting, making movies, and telling stories. Allen was also compassionate and giving while he was growing up, too, as his fourth grade teacher told Allen’s mother how he played with a handicapped classmate instead of playing with all the other kids. Their family enjoyed spending time together including the time they went to Michigan. Allen’s parents put all three kids in a sightseeing plane on that trip, which made them just a bit anxious because they “had all their eggs in one basket!” As a student he attended local schools and went on to earn his undergraduate degree from University of St. Francis in Fort Wayne. Later, Allen earned his master’s in fine art-painting/drawing from Bowling Green State University in Ohio.

New and exciting changes were in store for Allen when he met the young woman of his dreams. Her name was Kristine “Kristi” Heyerly, and they met when he answered her ad in the newspaper. It was quite interesting, too, as Kristi’s brother dared her to place the ad while Allen’s friend dared him to answer. Allen was actually the third guy to call and the second to take her out. That date led to more dates, and with a desire to spend the rest of his life with Kristi, Allen proposed while at the Chicago Museum of Art. The sweethearts were married on June 8, 1996, at the Alliance Community Church in Ft Wayne, 11 months after they began dating. Allen and Kristi were blessed to welcome two children including Zackary and Maxwell into their hearts and home. Allen treasured his family, and there was nothing he loved more than spending time with his loved ones. He and Kristi kept a snow globe collection for each year they were together. Allen and his wife did their best to buy a snow globe that was significant to an event that year.

With a passion for art, Allen was blessed to be able to make a career doing what he loved. He spent many years as an art professor at Ivy Tech, IPFW, ITT Tech, University of St. Francis, and St. Charles School. Most recently, Allen was working a painter for Indiana Signworks.

Over the years Allen was one to keep busy. He wasn’t someone who liked traveling much, but he did enjoy going to the same museum every year and also took a memorable trip with his in-laws to the Smokey Mountains. Allen loved the sport of fencing and took part in chalk walks at the Three Rivers Festival in Fort Wayne and also at other festivals in Greenfield, Columbia City, and Garrett, Indiana. He was an animal lover who liked helping injured animals whenever he could. Allen cherished the companionship of his own pets, Petey, Popeye, Junior, Charles, Shadow, and Scrappy. A man of faith, he had recently become a lay minister. Eager to serve in this way, he had already assisted with a couple of weddings and a funeral. Allen liked Star Wars and was into both science fiction and action movies.

Although he was taken from his loved ones much too soon, Allen Etter made a significant impact in the lives of those around him. He was deeply devoted to the people he loved, and his compassion also extended to animals as well. A renaissance man, Allen was truly one of a kind. Dearly loved, he will never be forgotten.

Allen Etter, of Fort Wayne, IN, passed away Monday, May 14, 2018. Allen’s family includes his wife, Kristine (Heyerly); parents, Louis & Judith (Seaman); sons, Zackary & Maxwell all of Fort Wayne; and siblings, Jill (Brian) Lepper of New Haven & Kenneth (Gayle) of Leo. Allen’s funeral service is 11 a.m. with viewing one hour prior on Monday, May 21st at St. Joe Community Church, 2900 N. Anthony Blvd., Fort Wayne. Viewing is also Sunday, 3 - 8 p.m. at the church. Allen will be laid to rest in Harlan Cemetery. In lieu of flowers, memorials are to Cancer Service of NE Indiana or Soaring Hawk Raptor Rescue. Fond memories may be shared at www.dooleyfuneralhome.com

To order memorial trees or send flowers to the family in memory of Allen S Etter, please visit our flower store.