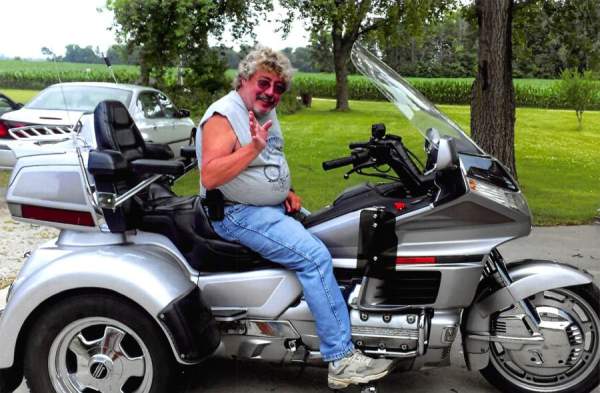 Byron was born in Paulding on September 2, 1956 a son of the late Dean & Josephine (Foreman) LePierre.

Byron worked at Lincoln Life for 22 years and then at INDOT.

He was a fun loving, humorous man who loved his family.

He will be laid to rest in Wiltsie Cemetery.

It was clear to see for anyone who knew him that Byron LePierre was simply just a kid at heart. A fun-loving man whose core was built around his uncanny sense of humor and more than a little bull, Byron brought much laughter to those around him. Yet there was another side to Byron which endeared him to many. His love of family knew no bounds and whenever there was a need Byron was there with a caring heart. A sensitive man just the same, Byron was not afraid to show those that meant the most to him how he felt. For those who knew and loved him best, Byron will be deeply missed.

Although the Cold War was an ever present threat, the 1950s was an uncomplicated age of innocence in our nation’s history. It was during this time when the birth of Byron Wayne LePierre on September 2, 1956 delighted his parents, the late Dean and Josephine (Foreman) LePierre. Born in the close-knit community of Paulding, Ohio, Byron was raised in Payne as an only child although he had an older sister who sadly died before he was born.

Byron’s father supported their family with his work at International Harvester in nearby Fort Wayne, Indiana while his mother remained at home with Byron as a homemaker. From his earliest years, Byron always had something up his sleeve. Sharing numerous boyhood adventures, he created his share of mischief, especially with his Super Bee. Byron loved the lake and help restore a family wooden boat which he lead him to numerous trips to Long Lake in Michigan and Coldwater Lake.

Having attended Payne High School, being a character in school had never stopped! He played the drums in the band. On one such occasion during a school performance, Byron’s humorous spirit was displayed in such a way that it incredibly embarrassed his mother. Byron began playing George of the Jungle, while the band members were entering the stage! He was also a member of the basketball team for a time and played hockey for fun and got to practice with the Komets. Before graduating high school, Byron took a job at Burger Chef in New Haven, Indiana.

Byron worked for Lincoln Life for 22 years. During this time, he married Denise Jeffries and took on Denise’s children Kacee and Jessica as his own, and they had a daughter, Emily.

Byron discovered the love of his life when he met Diana Billue, the two were happily married on June 12, 1999. Byron claimed another set of children, Diana’s son, Jason and daughter, Annah, and loved them as his own. His daughter, Emily was thankful for Jason coming into their lives, so she wouldn’t have to be the son he never had! Eventually he left Lincoln to work for INDOT. Over the years memorable times were shared and enjoyed with family and friends. They had a four-wheeler that was used during every season as he took the girls sledding in the winter. Byron even went on a field trip with Emily once and surprised her with some radishes for lunch they enjoyed eating together. Spending time at Coldwater lake was very loved! Byron and Diana loved going up alone to spend time with Scott, but they also Loved taking the kids. Although he loved to hunt, Byron always enjoyed taking fishing trips to Coldwater with the guys to cook the meals more than to do any fishing! After Jason joined the service, Byron enjoyed following him around the country and taking cruises when they could. A train trip to Wisconsin one time was a highlight as that was the first time he took a train and ended up loving it.

There were other things Byron was into, as well. As an adult he came to love ice cream with sugar on the top and watermelon with salt. Besides hunting and fishing, Byron absolutely loved NASCAR, and in addition, he was an avid Chicago Cubs and Bears fan. He also loved losing money at the casinos, but his favorite was firekeepers in MI. He enjoyed going to the library to pick out books to read. He loved reading stories about the mafia, World War 2, and looking through cook books. He read so much that they were going to New haven library and had to start going to Woodburn to pick out new books. Byron missed his calling by not being a meteorologist, as he enjoyed keeping an eye on the weather by standing outside during storms and loved watching the weather channel. He absolutely loved to cook and grill, some of the family’s favorite meals were his ribs, skirt steak, smoked ham, and many more. Byron also went in with Dan and bought a Hog roaster and they loved doing parties for people with the help of their good friend John.

It was in Byron LePierre’s nature to be a fun-loving and humorous character that loved his family with all his heart. With ways all his own, he added many smiles to the faces of those around him. More than anything, Byron was a caring and sensitive man who dearly loved his family. He will be remembered as a loving husband, a great dad, and an amazing grandpa to his two grandchildren. He leaves numerous friends who count themselves as fortunate to have shared his company as when you became a friend you became a part of the family. With much to be remembered, Byron will live on in the hearts of those he leaves behind.

Byron Wayne LePierre, age 61, of New Haven, Indiana passed away on Wednesday, August 1, 2018. He will be sadly missed by his wife, Diana (Billue); children, Jason (Traci) Billue of Sparta, Wisconsin, Emily Hartman of Westfield, Indiana, and Annah (Tyler Brunson) Chaney of New Haven, Indiana; two grandchildren, Acelynn and Easton Hartman. The funeral service celebrating Byron’s life will be held on Friday, August 10, 2018, 11:00 AM at Dooley Funeral home, 5761 SR 500 in Payne, Ohio with viewing one hour prior. Friends may also meet with Byron’s family on Thursday, August 9, 2018 from 4-8 PM at the funeral home. He will be laid to rest in Wiltsie Cemetery. Memorials in Byron’s memory to Dooley Funeral Home, PO Box 452, Antwerp, Ohio 45813. Fond memories may be shared at www.dooleyfuneralhome.com.

To order memorial trees or send flowers to the family in memory of Byron Wayne LePierre, please visit our flower store.