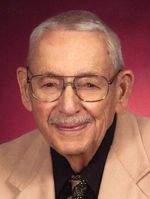 C. James Harp, 89,  passed away on Thursday, September 15, 2011 at Saint Joe Hospital, Fort Wayne, IN, following a brief illness.  Jim lived his whole life in and around Payne, Ohio. The last several years he and his wife, Elaine, divided their time between Hamilton Lake, IN and Hot Springs Village, Arkansas.  Jim was born on January 16, 1922, the oldest and only son of Clarence W and Anna (Parady) Harp.  He graduated from Payne High School in 1940, where he played basketball, football and enjoyed FFA.  He also helped his father with farming and remembered distinctly using horses and mules in his daily farming chores.  Jim was a WW 2 Veteran, serving with the 83rd Infantry (Thunderbolts) in the European Theater.   Jim was awarded a Purple Heart, after receiving a mortar wound in France.  Following the war, Jim served as a Rural Letter Carrier in Payne, Ohio for 37 years.  He married Elaine Schaefer on May 10th, 1952 at St. Johnâ€™s Catholic Church in Payne Ohio.  He was the proud father of two children,  Frederica (Fritzi) Harp Nodine (Dr. Duane) of Bluffton, IN and James D. Harp of Payne, Ohio.   He has 3 grandchildren, Sarah Nodine of St. Louis MO, Jon (April) Nodine of Louisville, KY and Bailey Nodine of Bluffton IN.  He has one great grandson, Jones Harp Nodine of Louisville, KY.  Jim is also survived by his sister, Genevieve Stumbo of Lakeland ,Florida.  He will be missed by many family members including  loving nieces, nephews and cousins.   Jim served on several school boards including Payne Local School, Paulding County Schools and Vantage Vocational School .  Active in his church in both Payne and Hot Springs Village, AR, Jim was a 4th Degree Knight of Columbus.  Jim was also past commander of the Ruben J Smith Post 297 American Legion.   Jim was an avid golfer both in Payne and Hots Springs Village.  He was preceded in death by three sisters, Lois Ann Hudson, Joan Sutton Gauvey and  Janice Larson.

Viewing will be held on Sunday, September 18, from 2-6:30 pm, with recitation of the Rosary at 6:30 at Dooley Funeral Home, 5761 SR 500 Payne, Ohio.  Viewing will also be from 9- 9:30 am on Monday, September 19 at the funeral home.  A Funeral Mass follows at 10:00 am at Divine Mercy Parish, Payne, Ohio.  Preferred memorials are either Masses or to Divine Mercy Catholic School, Payne. Memorials may be mailed to Divine Mercy, 417 N. Main Street, Paulding, Ohio 45879.  Please list  "Harp memorial/school" on memo line on your check.

To order memorial trees or send flowers to the family in memory of C. James Harp, please visit our flower store.