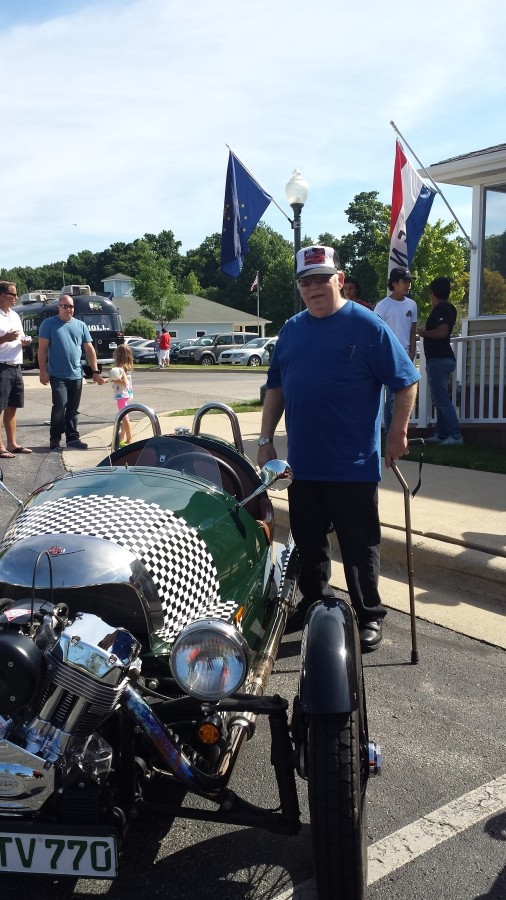 He served in the U.S. Navy in the Vietnam War & worked for 23 years in KMart Warehousing.

Denny will be sadly missed by his wife, Deborah (Bell) whom he married July 13, 1974; daughter, Carrie and brother, David. He was also preceded in death by his son, Jimmy.

His funeral service is 10 AM with viewing at 9 am on Saturday, October 6, 2018 at Saint Jacobs United Church of Christ, Payne.

He will be laid to rest at Lehman Cemetery with military honors.

Positive and tender-hearted, Dennis Williams live a life rich in faith and family.  A humble man, Dennis was a man of principles.  Without airs of importance, he preferred being called “Denny”. He valued the simple pleasures in life and knowing he was being of service to others.  Denny embodied his faith and, in so doing, proved a powerful role model for all who were blessed to know him.  A treasured son, brother, husband, father, and friend.  Denny will long be cherished in the hearts of those who he loved.

1947 proved to be a year of continued celebration of the nation’s momentous victory in World War II.  American heroes had eagerly returned to a country filled with renewed spirit and hope, ready to claim their share of the American Dream, for which they had so fought.  As American prosperity grew like no time in our history, hope sprang eternal and the Greatest Generation soon proliferated by creating the Baby Boomers.  In Paulding, Ohio, the cause for celebration grew even greater as Helen (nee Gibson) and O’Dell Williams welcomed their first son, Denny into their hearts and home on December 12th.

Like many in his generation, Denny enjoyed a childhood rooted in family values.  While his father provided for the family with his work as a mechanic, Denny’s mother was a homemaker who also worked outside the home.  Together they created a loving, faith-centered home that afforded Denny a firm foundation upon which to build the rest of his life.  Denny loved his time spent with his Grandpa “Hoot” in attending local auctions.  As a youngster, Denny was a Cub Scout with his mother leading the pack as their Den Mother.

As a teenager in high school, Denny contracted encephalitis.  He survived the infection but had to miss a great deal of school.  Determined to graduate with his class, he spent most of his Christmas vacation working with a tutor (Mrs. Elaine Harp) to catch up with his studies.

The result of his hard work and determination, Denny proudly graduated from Payne High School in 1965.  While working at Strayer’s Grocery in Payne, he attended classes at International Business College in Fort Wayne, Indiana, where he earned his associate’s degree in accounting in 1967.

Like many young men in his generation, Denny was called to serve during the Vietnam War.  With tremendous pride, Denny served in the US Navy as a disbursing clerk on the supercarrier, the USS Kittyhawk.  The first active ship of her class, the Kitty Hawk was a state-of-the-art oil-fired aircraft carrier that went on to become the United States warship with the second longest active status.

Upon safely returning home from his military service, Denny continued working at the Strayer Grocer while attending classes at the University of St. Francis.  In time, he felt he had a better opportunity for higher wages at the Kmart Warehouse in Fort Wayne.

Not only did his 23 years of employment with Kmart afford him a reliable income and good health insurance his time there gifted him with the opportunity to meet the love of his life, Deborah Bell.  Having recently received a speeding ticket and a warning that she could lose this license for 10 days, she asked her supervisor if he knew anyone who could provide her with a ride to and from work.  Her supervisor immediately thought of Denny.  Ron introduced the pair.  It didn’t take long for Denny and Deb to realize their good fortunes, and soon they were a couple.  With their eyes on a future to be spent together, Denny and Deb married on July 13, 1974 at Calvary Temple in Fort Wayne.

A devoted Christian, Denny consciously strove to embody the values of his faith.  A long-time member of St. Jacob Evangelical & Reformed Church, he served a few terms as a deacon and an elder on the church board.  He loved unconditionally, practiced forgiveness, encouraged peace and remained humble.

In his leisure time, Denny enjoyed southern gospel, country and western, and bluegrass music.  He also loved attending local auto racing in the tri-state area.  He also enjoyed a couple of seasons as an all-round helper in the touring series, USA Modified Cars.  His favorite NASCAR driver was Mark Martin.  He also volunteered for various activities associated with PARC Lane and PC Workshop.  He was a devoted husband and father who quietly relished in the many blessings of his marriage and family.

Clearly the world seems less certain in the absence of Denny’s steadfast presence.  While it is hard to imagine a future without his heart-centered kindness, sincere listening, and good company.  May our many memories of Denny provide deep comfort. May it also comfort us to know that we carry the gifts of Denny’s legacy in our hearts where his spirit will continue to inspire others as he so inspired us.

Denny will be sadly missed by his wife, Deborah (nee Bell) whom he married July 13, 1974, daughter, Carrie Williams, and brother, David Williams.  He was also proceeded in death by his parents and his son, Jimmy Williams.

He will be laid to rest at Lehman Cemetery with military honors.

Fond memories may be shared at www.dooleyfuneralhome.com.

To order memorial trees or send flowers to the family in memory of Dennis O'Dell Williams, please visit our flower store.
Send a Sympathy Card