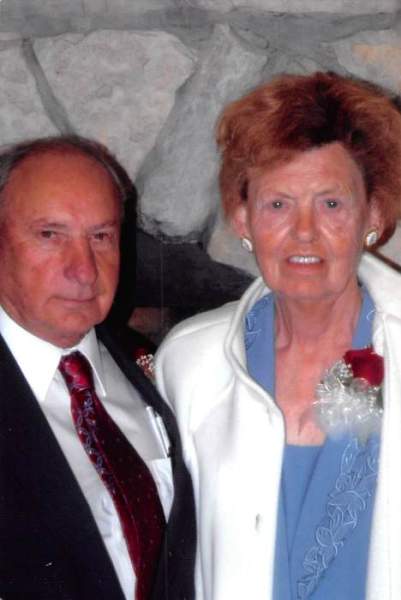 With a journey that spanned times of war and times of peace, times of plenty and times of want, Dorothy Meyer lived life to the fullest while holding her loved ones near. She was a sports fan who also enjoyed reading, but nothing was better than spending time with the ones she loved. Dorothy and her husband exemplified what marriage is truly intended to be as they were partners in work and partners in life who experienced so many of the best things that life has to offer side by side. A longtime resident of the community she loved, Dorothy touched the lives of so many others in such a special way. She will be deeply missed but never forgotten.

The 1930s were an unforgettable time in American history as the entire decade was cloaked in the hardship of the Great Depression. Jobs were scarce, the unemployment rate soared, and things only became more dire when a drought covered our nation’s heartland for nearly two years during this time. Despite the trials around them Henry and Hilda (Bohren) Roemke were able to focus on some exciting days in their own lives as they were eagerly anticipating the birth of their new baby as December dawned in Woodburn, Indiana, in December of 1932. Their wait was over on December 5th when the baby girl they named Dorothy M. drew her first breath.

In many ways Dorothy was a young girl of her generation. Her father worked at Hardware Wholesale on Nelson Road in Fort Wayne, and at times he helped Dorothy’s mother at her restaurant, The Ritz Grill in Woodburn. Because her father loved baseball, they frequently went to games, and Dorothy continued to love sports into her adult life. She looked forward to spending time at her Grandma Bohren’s turkey farm. Dorothy attended Woodburn Lutheran Elementary, was involved in the local 4-H, and active in her church both as a member of the youth group and as a Sunday school teacher. Dorothy played the clarinet in high school and later became a high school graduate.

Life was forever changed for Dorothy when she met the young man of her dreams. His name was Virgil Meyer, and they met at Antwerp Alleys when she came there, across the state line, to bowl. They began dating and soon found themselves deeply in love. With a desire to spend the rest of their lives together the sweethearts were married at Christ Lutheran Church in Woodburn on April 4, 1959, followed by a nice reception. Together they welcomed three children including Martha, Edward, and Patrick into their hearts and home. Their family looked forward to vacations every year as their travels took them to Niagara Falls, the Smokey Mountains, Washington, D.C., the World’s Fair in New York City, and the Wisconsin Dells. At times they just went to a lake for a week. On one occasion, Dorothy was canoeing and tried to get out but “went down” instead! Dorothy and Virgil continued operating the bowling alley for many years. Most of the kids there called Dorothy “Mom!”

Throughout her life Dorothy was a woman of many interests. She remained an avid sports fan and regularly cheered for the Chicago Bears, the Indianapolis Colts, the Cincinnati Reds, and IU basketball. Dorothy loved reading, especially books by Karen Kingsbury and Amish books by Beverly Lewis. She loved doing various crafts, and she looked forward to decorating for the holidays, especially Christmas. In fact, there was one year that Virgil had to take down the decorations at the bowling alley because Dorothy went a bit overboard! Within her community, she was a member of the Antwerp American Legion Auxiliary and Antwerp Conservation Club. As a member of Mt. Calvary Lutheran church she was very involved with the Ladies group, she wrote up the weekly bulletin for awhile and was treasurer for a couple of years. She enjoyed driving the Amish and often told stories of places she and Virgil took them, laughing with the ladies and doling out candy and gum to the children.

All who knew Dorothy Meyer would agree that she was an extraordinary woman to know and love. She was deeply devoted to God, her family, and her church, and she was the sort of person who would do whatever she could to help someone else. Humorous and fun-loving, she made the most of the days she was given. Life will never be the same without her here, but she leaves behind a timeless legacy that her loved ones will proudly carry on in her footsteps.

Dorothy was born in Woodburn, Indiana on December 5, 1932, a daughter of the late Hilda (Bohren) and Henry  Roemke.

Most of us would remember Dorothy working beside her husband at Antwerp Alleys.
She was a member of the Antwerp American Legion Auxiliary & Antwerp Conservation Club.

Her sisters, Ruth Bennett & Joan Geary and grandson, Jonathan Chase have also preceded her in death.

Her funeral service is 11 AM on Wednesday, January 3rd at Mount Calvary Lutheran Church of Antwerp, with viewing one hour prior.

She will be laid to rest at Maumee Cemetery.

To order memorial trees or send flowers to the family in memory of Dorothy M Meyer, please visit our flower store.