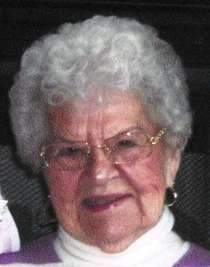 Born September 30, 1922 in Fort Wayne, a daughter of the late Bertha and Gottlieb  Kuehnert.

Memorials may be made to Woodburn Lutheran School or Visiting Nurse Hospice, Homestead Road.

Per Dorothy's request, there will be no service.

Dooley Funeral Homes of Antwerp & Payne assisted her family.
To order memorial trees or send flowers to the family in memory of Dorothy Schaaf, please visit our flower store.