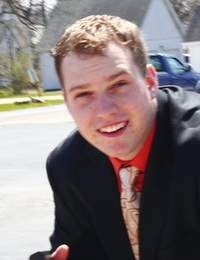 Evan worked at Discount Tire in Ft. Wayne, In. for 5 yrs.  He was involved for most of his life in the Family Business, Gordon Tool, Inc. and for the lastÂ  2 yrs. worked full time where he was responsible for logistics, maintenance as well as sales.

Evan truly had a great love for God, Life and Country.  He especially enjoyed cars and racing cars.  He was an active member of the Ft. Wayne Car Club, Ft. Wayne Muscle.  He was a former Boy Scout and Altar Server at (St. John the Baptist) Divine Mercy. He was also a life member of the NRA.

Evan was Pro-life and was involved with ZIJA International where he actively worked to help those in need, in various parts of the world.  He was a member of Divine Mercy Catholic Church.Â Â

Visitation for Evan will be Monday fromÂ 2:00 â€“ 9:00PMÂ at the Dooley Funeral Home, Payne.

A Christian wake service will be held at 7:00 PM followed by the rosary.  A mass of Christian burial will be held at 11:00 AMÂ Tuesday at Divine Mercy Catholic Church, Payne.  The Rev Jacob Gordon will officiate.Â

Evan will be laid to rest at St. Johnâ€™s Catholic Cemetery Payne.Â  Suggested memorials are to the Wounded Warrior Fund and the Zija Miracle Foundation.Â Â
To order memorial trees or send flowers to the family in memory of Evan Gordon, please visit our flower store.