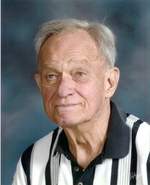 Gene was born on March 30, 1923, in Grover Hill, OH, the son of the late John and Minnie (Leiter) Sheely.  On Oct. 11, 1942 he married Virginia Boyd, who died on Oct. 28, 2003.  He was self-employed as an appliance repairman, photographer, and farmer.  He served in the U.S. Army during World War II.  He was an active, lifelong member of St. Paul United Methodist Church and a 60-year member of the Flat Rock Masonic Lodge.

Funeral services will be held at 11 AM, with viewing one hour prior, on Saturday, Nov. 20, 2010 at St. Paul United Methodist, 312 S. Main, Payne. Pastor Julia Ronngren will officiate.

Burial will be at Lehman Cemetery.

To order memorial trees or send flowers to the family in memory of J. Eugene Sheely, please visit our flower store.