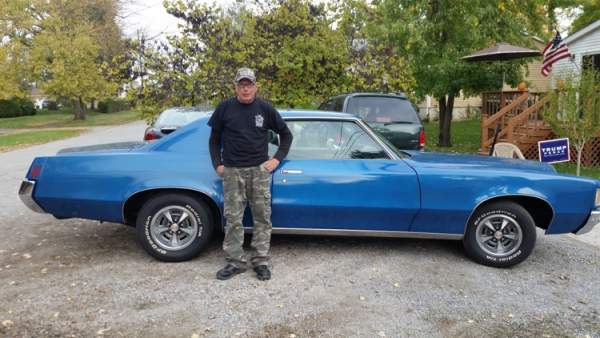 A strong, hardworking, and kind man, Larry Mansfield lived a life of purpose while holding his loved ones near. He was an honorable man who never let life get the best of him no matter the circumstances around him. Larry was a family man through and through whose greatest source of pride and joy was found in his family. Vibrant and fun-loving, he enjoyed so many things, but what made these experiences so special was sharing them with the ones he loved. Life will never be the same without Larry here, but he leaves behind a timeless legacy that his loved ones will forever treasure.

The 1960s were a decade to remember as America was transforming in many ways. Civil rights were front and center, and this was also the decade we elected the young John F. Kennedy as our 35th President of the United States only to mourn his death a short time later. This was also the decade that Elvis Presley took the music world by storm with his rock ’n roll music. It was in 1962 that Walter Herbert and Carole Jean (Knotts) Mansfield were eagerly awaiting the birth of their new baby boy as the beauty of spring began to unfold in April of that year. The big day finally arrived on April 21st when the baby boy they named Larry DeWayne drew his first breath in Paulding, Ohio. Raised in Antwerp, Ohio, he was the oldest of five Mansfield children as he was raised alongside his siblings, Michelle, Walter, Cindy, and Kimberly. Larry’s father worked as a carpenter while his mother worked at Dana Weatherhead in Antwerp.

For the rest of his life Larry and his siblings spoke of their fun antics while growing up. Of course they were typical siblings as Larry could often be found carrying his little sisters around while beating up on his brother, Walt. Larry and his siblings made amazing memories together while walking from home to the pool at the Antwerp School during the summers. Their family once went to Georgia on vacation, and all the Mansfield children got to go into the ocean. However, their fun time soon turned to a time of great concern when Larry needed to pull out two of his siblings who come into a bit of trouble with the strong undercurrent. He always was a protector when it came to his sisters as well as to his brother, Walt, when needed. Although there was the one time that Larry hit Walt on the foot with a baseball bat, and the boys fibbed to their mother that the injury occurred when the bunk bed fell on Walt’s foot! The love that all the Mansfield children shared for one another was easy to see, however, and they were close throughout Larry’s entire life. As a teen Larry became a car fanatic, although it has also been said that he was a girl fanatic as well!

Throughout his life Larry worked hard in everything he did. During his younger years he worked at Holly’s Market. In fact, he was working there the year it burned. Larry earned his associate’s degree in applied science from ITT Tech. As a young man he honorably served in the United States Marines as a marksman. Larry’s time of service occurred during the conflict in Granada, although he was lucky enough to not be deployed there. As someone who was passionate about cars, he worked as an ASE Certified Mechanic at Heckley Automotive.

Not to be forgotten during Larry’s days in the Marine Corps was his introduction to the woman who would change the course of his life forever. Her name was Angela Williams, and after dating for a time they were married. For the rest of his life Larry forever considered the day he got married to be among the best days of his life. Together they welcomed their son, Lee Isaac, into their hearts and home. Although their marriage later ended in divorce, Larry and Angela remained friends. In fact, he even went to Maryland to see his son Lee, Angela and her new husband, Tom Purdy. Tom referred to Larry as Angela’s other husband, and the two men were also friends for the rest of Larry’s life. Later in life Larry was filled with unspeakable joy when his son told him that he was going to be a grandfather.

Even when he wasn’t working, Larry was one to fill his days. He was a member of First Baptist Church of Antwerp. As his family and friends can attest, Larry was a huge NASCAR fan, and he loved cheering on his favorite drivers, Dale Earnhardt, Sr. and Dale Jr. Everyone knew not to call during a race! He loved to drag race and was known for doing burnouts. There was even the time he did that on the grocery store parking lot and ended up getting away with it since his brother was the one to be blamed. Of course Larry also loved working on cars. In everything he did, his family was always first and foremost in his life.

All who knew Larry Mansfield would agree there was no one quite like him. He worked hard, but he played hard, too, and everything was better when he was surrounded by the ones who meant the most to him. Life will never be the same without Larry here, but he leaves behind a priceless collection of memories that his loved ones will forever hold near and dear to their hearts. Larry had base of friends like no other.

PLEASE USE THE SERVICE DETAILS TAB TO GET DIRECTIONS TO THE FUNERAL HOME AND THE CHURCH.

To order memorial trees or send flowers to the family in memory of Larry D Mansfield, please visit our flower store.