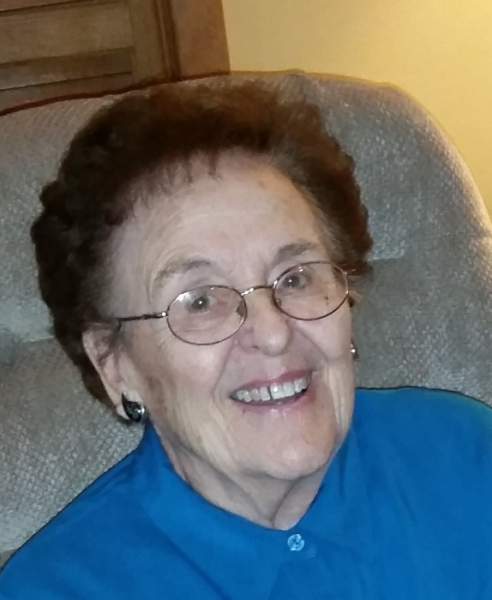 Mary Jane Lunn Fulk, formerly of Payne, Ohio passed away August 18, 2015 in Austin, Texas at the age of 93.  Mary Jane was born in Payne, Ohio on October 12, 1921.  She was the daughter of the late Frank “Doc” Lunn and Cora Lewis Lunn.   Mary Jane grew up in Payne, Ohio with her ten brothers and sisters.  On March 18, 1940 she married Francis Woodrow "Woody" Fulk.   Mary Jane and Woody Fulk spent the next 71 years living, loving and raising a family in Payne, Ohio.  Woody died on November 11, 2011.  Mary Jane moved to Texas in 2014 to be closer to her two sons, grandchildren and great-grandchildren, but her heart never left Payne, Ohio and her beloved husband, Woody.

Mary Jane was a woman of grace and good humor.  She loved to travel, take rides through the countryside, watch football and enjoy her family.  Her faith was inspirational to those who knew her.  She will be sadly missed by her  two surviving siblings, Bill Lunn, of Highland, Florida and, Enid Lunn Brooks, of Grants, New Mexico, her much-appreciated brother-in-law Keith Carter, as well as, her sons, Mark Fulk, and his wife, Janet, of Austin, Texas,  Kent Fulk, and his wife, Debbie of  Metairie, Louisiana; grandchildren, Lisa Smith, of Eugene, Oregon, Sasha Smith, of Maui, Hawaii, Corrie Fowble and husband, Jimmy, of Austin, Texas, Michael Fulk and wife, Vanessa, of Austin, Texas,  and Mason Fulk of Fort Worth, Texas.  Mary Jane was blessed with great grandchildren; Thunder Shiviah, of Eugene, Oregon, Makani Smith, of Maui, Hawaii, and Maddox Fulk, Mia Coy, Austin Fowble and Elliott Fowble, all of Austin, Texas.  Mary Jane had many nieces and nephews and their families who loved her dearly.

There are many hearts that will miss Mary Jane and many hearts waiting to greet her at Heaven’s Gate.

Mary Jane was a member of St. Paul United Methodist Church in Payne.

There will be a memorial service for Mary Jane on Sunday, September 20, 2015, 11:30 am at St. Paul United Methodist Church, 213 S. Main St, Payne, Ohio.   She will be laid to rest at Lehman Cemetery next to the love of her life, her husband, Woody Fulk.

In lieu of flowers, please send memorials to your local hospice.  Hospice was a great service to Mary Jane and her family during their time of need.  God Bless them.

To order memorial trees or send flowers to the family in memory of Mary Jane Fulk, please visit our flower store.