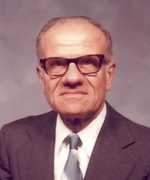 During WW II he served in the operation of supply points in France, Belgium, Luxembourg & Germany in Patton's Third Army. He was part of a group of soldiers who inspected Buchenwald Concentration Camp the day after it was liberated.

He was a member of the Antwerp United Methodist Church.

On August 9, 1940 he married Hope Eleanor Revert in Wauseon.

To order memorial trees or send flowers to the family in memory of Max A Smith, please visit our flower store.