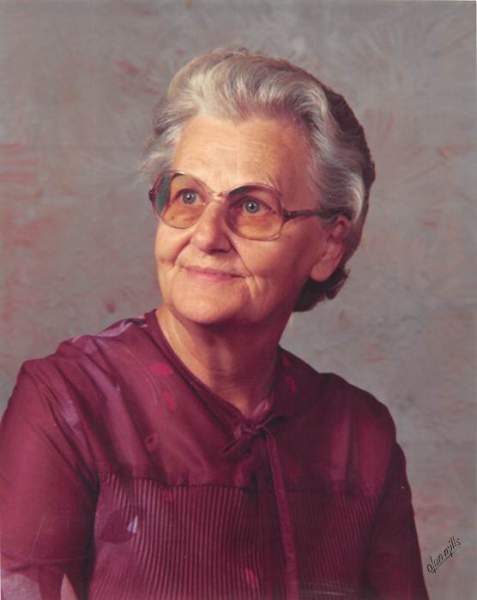 She was a devoted wife, mother, grandmother and member of Payne Church

She was also preceded in death by her son, Harold; grandsons Michael & Jeremy and great grandson, Braden Anderson.

She will be laid to rest in Lehman Cemetery.

Memorials are to Payne Church of the Nazarene.

With an undauntable faith and a heart centered in hope, Myrtle Lee lived a long and beautiful life rich in family and friends. Not only was Myrtle hard-working, persevering, and resourceful, she was also loyal, generous, and fun. She was a natural people person who was loved by all who knew her. A devoted wife, mother, and grandmother, Myrtle will long be remembered in the hearts and lives of those she loved.

1919 proved to be a year filled with significant events. With the Treaty of Versailles, the year began with the official end of WWI and the creation of the League of Nation, known today as the United Nations.

Congress established Grand Canyon National Park, Franklin and Eleanor Roosevelt married, Daylight Saving Time began in the US, Prohibition came into force with the passing of the 18th Amendment in January, and women finally secured the right to vote with the passing of the 19th Amendment. Home life gained significant improvements as both the rotary telephone and the pop-up toaster were invented this year. It was a time rooted in the warmth of peace and prosperous hope. Nowhere was there more hope than in Edgerton, Indiana as Essie (Bloom) and David Samuel Wirts welcomed their daughter Myrtle into their hearts and home on March 21, 1919.

Born in a time of plenty and growing into adulthood during the Great Depression, Myrtle’s early years formed the firm foundation upon which she built the rest of her life. Whether witnessing the atrocities of World War II, the Vietnam War, or all the long-standing unrest in the Middle East, Myrtle possessed a belief that “all things work to the good for those who love the Lord.” With her unwavering faith in the Lord Jesus Christ, she was able to put a positive spin on anything, knowing who held her hand and what her final destination would be!

Myrtle married Robert E. Lee on September 9, 1935. They made their home on a local farm and were soon blessed with children. With a commitment to creating a loving home, Myrtle worked tirelessly to ensure her eight children were not only fed and clothed but were rooted in a firm sense of faith. Working the farm with her husband Robert, there was little time to be idle. Her days were spent caring for the children, bent over the old wringer washing machine, hanging laundry on the line, and butchering chickens for the family table. Myrtle was fiercely protective of her children. When there were no lunch boxes for the kids, she carefully wrapped each of the kids’ lunches in newspaper like fancy Christmas gifts, and she always stood by their side. Although their home may have been missing many of the luxuries of the times, it never lacked in love or grace. Hard work was balanced with quality play. Highly competitive games of cards or dominoes inspired Myrtle’s giggles and laughter which more often than not led to her screams of delight upon winning the game at hand.

Company was always welcome in her home. She made a tradition of serving coffee and a bite to eat with entertaining stories from her life that often resulted in her laughing harder than her guests. If it lightened another’s day, she had no problem sharing a story of her silly mishaps.

Ask anyone who knew her, especially her co-workers at the Paulding County Hospital or Dallas Lamb Nursing Home, and you’ll soon hear countless famous stories of “ornery Myrtle’s antics.”

As in her youth, Myrtle always found a way to embrace life with dignity, faith, and a sense of humor. She accepted other’s humanity and was a loyal ally of her children; no matter what they did, she always took their side. She gifted them with her love and passed along her faith which often proved a powerful source of inspiration especially in the face of life’s storms. Myrtle was a proud mother who relished in watching her children grow into adults and have families of their own.

Welcoming her 27 grandchildren, 59 great-grandchildren, 20 great-great-grandchildren into the world, and happily anticipating the births of two more was truly Myrtle’s heart’s delight. What a gift to clearly see the beauty of her and Robert’s legacy in each of their eyes. And what a comfort that as Myrtle marched into the September years of her life, her children proudly stood at her side embracing her as a blessing and enveloping her in the same support she so willingly gave them.

Clearly, the world feels less certain in the absence of Myrtle’s steadfast presence. As Heaven has grown richer for Myrtle’s arrival, may our many treasured memories of this beautiful woman’s gifts in our lives afford deep comfort. May it also provide comfort to know that with each warm hello we extend to another, cup of coffee and story we share, faithful step we take, and laughter we inspire, we stoke the flame of Myrtle’s bright legacy and ensure that it continues to warm and inspire others.

As I stand before God at the end of my life, I Hope that I do not have a single bit of talent left and can say, “I used EVERYTHING You gave me.” That you did mom!

A devoted wife, mother, grandmother, and member of Payne Church of the Nazarene, Myrtle was preceded in death by her husband Robert E. Lee who died October 11, 1980.

She was also preceded in death by her son, Harold; grandsons Michael & Jeremy and great-grandson, Braden Anderson.

To order memorial trees or send flowers to the family in memory of Myrtle I. Lee, please visit our flower store.