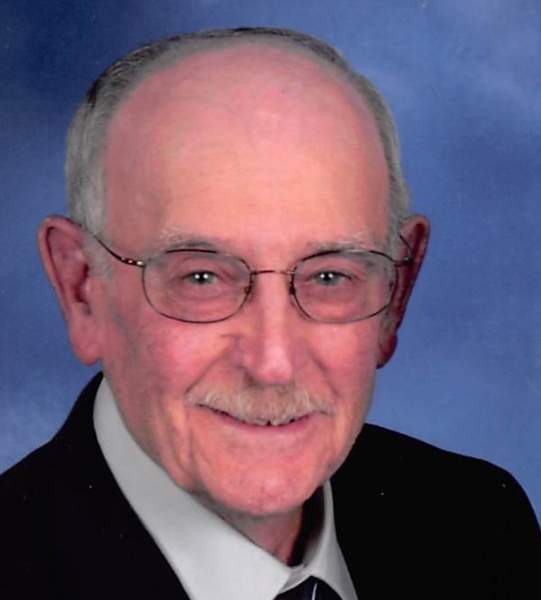 Paul was born in Paulding on October 4, 1930 a son of the late Raymond & Vira (Shrider) Smalley.

He proudly served his country during the Korean War in the U.S. Army & worked as an electrician for 40 years at the Antwerp Equity Exchange. He enjoyed coon hunting and harness racing, but his true love was his family!

Service is Tuesday, 11 am St. Paul Lutheran Church, Paulding with viewing one hour prior.

He will be laid to rest in Maumee Cemetery with military honors.

Paul Smalley was a wonderful husband, father, and grandfather. Well known throughout the community he loved, Paul’s hard work provided for his family in countless ways including more than forty years as a maintenance/manager at the Antwerp Equity Exchange. Generous beyond measure, there simply wasn’t anything he wouldn’t do for his family. Although he will be deeply missed, Paul leaves behind a wonderful collection of memories that his loved ones will cherish forever.

Looking back on the 1930s, it is difficult to recall much of anything that wasn’t affected by the Great Depression. There were few jobs and a soaring unemployment rate that left countless American families without homes. Despite these tough times, Raymond and Vira (Shrider) Smalley celebrated with great joy the arrival of their newborn son, Paul, on October 4, 1930, in Paulding, Ohio. Joining four older siblings and later followed by his baby brother, his birth brought much joy and happiness to the family home.

Growing up a family farm, Paul knew the value of a hard day’s work at an early age. He worked alongside his father, who had struggled with health issues until he was able to quit school after the eighth grade to help out full time. Typical of most children raised in a large family, he had his fair share of sibling rivalry! He was known to be ornery and often picked on his siblings. All in all, they remained close over the years. In addition to working on the farm, he took various jobs in order to pitch in to support the family’s growing needs. A quick learner, over time Paul gained many valuable trades that proved to be useful in his adult years. With a strong desire to serve his country, Paul was drafted in the United States Army during the Korean War. He was proud of his years of service and had a shot wound he obtained in a foxhole while in Germany to prove his valor.

Not to be forgotten was the meeting of the woman of his dreams, Betty Zuber! It was love at first sight. He was working on her sister Stella’s farm at the time, and when they met, he knew she was the one! On a leave from the Army, they joined in marriage on July 12, 1952. The remaining eighteen months of service couldn’t go quick enough as he was eager to get back to his lovely bride and start their life together. The ship he was on coming back nearly capsized, yet he returned safely and wasted no time getting a job at the local drycleaners. Taking great pride in his work, Paul became obsessed with wrinkles in his clothing after working at the cleaners during those early years! He then secured his job at the grain elevator where he was responsible for all repairs to keep the facility running properly. Together they raised five wonderful children who were their everything.

Vacations were few and far between as the family always had animals to look after. Instead, they enjoyed short trips to Coldwater Lake and never missed the county fair! During their lake visits, Paul loved to fish. Although fishing was a favorite pastime, he taught his son, Joe the joy of coon hunting! The two of them shared many years of joining together each hunting season to share quality time. As a father, he was their greatest fan often attending their sporting events as well as supporting them with special projects or important life decisions. A jack of all trades, he often helped out his daughters with home projects and was a regular fixture in his son, Joe’s body shop. As their family grew to include grandchildren, he welcomed each opportunity to continue his tradition of being an Antwerp Archers fan cheering them on at each and every game they played. He loved to be asked to help out with projects or any home repair dilemma. There simply wasn’t much he wasn’t capable of doing!

Paul held a vast array of special interests over the years. Remarkably, he enjoyed his time as a harness racer and never tired of the thrill of the race! He also loved to garden. With his exceptional knowledge of growing up on a farm, his garden was the envy of the neighborhood! A lover of the outdoors, he even enjoyed mowing the yard, which he was still doing well into his eighties and up until just two weeks before his passing. Described as loving, caring, as well as supportive, Paul leaves behind a legacy of being loyal to the family he loved. He was happy to take in his father during his elderly years as well as a special cousin that moved back to the area from California. He modeled that above all else, family is the most important. May Paul’s loved ones be comforted in knowing they were loved beyond measure and may they lean on the unending wisdom that he left behind.

Paul E. Smalley, 87, of Antwerp, passed away Thursday, August 2, 2018, at Parkview Regional Medical Center. He was a devout member of St. Paul Lutheran Church and a lifelong resident of the community he loved. He will be sadly missed by his wife of sixty-six years, Betty (Zuber); children, Sandra (CW) Harper, Joe (Kathy) Smalley, Judy (Doug) Smith, Donna (Barry) DeLong, Carla (Kirk) Gaisford; brother, Bob Smalley all of Antwerp; 15 grandchildren; 20 great-grandchildren & one on the way! He was also preceded in death by his siblings, William Smalley, Ellen Beck, Nellie Wilhelm & LoDena Brown. Service is Tuesday, 11 am at St. Paul Lutheran Church in Paulding with viewing one hour prior. Viewing is also Monday, 2 - 8 pm at Dooley Funeral Home, Antwerp. He will be laid to rest in Maumee Cemetery with military honors. Memorials can be made to St Paul Lutheran Church, 601 Flatrock Dr, Paulding, OH 45879. Fond memories may be shared at www.dooleyfuneralhome.com

To order memorial trees or send flowers to the family in memory of Paul E. Smalley, please visit our flower store.