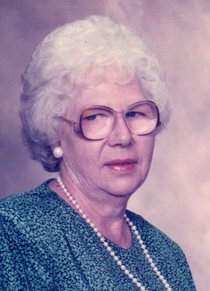 Ruth L. Neely, age 97, passed away on Monday, June 30, 2014 at 11:50 AM at Vancrest of Antwerp Assisted Living in Antwerp, Ohio.
She was born on September 2, 1916 in Antwerp, Ohio to Elmer B. and Clara L. (Armstrong) Beiderwell who preceded her in death.  On October 27, 1938 she married Ernest James Neely and he died on June 30, 2004.
Ruth was a homemaker.  She retired from Universal Tool and Stamping Company in Butler, IN.  She was an active member of the Antwerp United Methodist Church in Antwerp.  She was a former member of the Bethel United Methodist Church of Rural Antwerp, where she was a Youth Fellowship Leader, a Sunday School Teacher and a member of the WCTU.  She was a 1934 graduate of Antwerp High School and in 1936 she received her associate degree from the Ft Wayne Business College.  She was a former Election Poll Volunteer for Paulding County, Carryall Township.  Ruth and her husband had a passion for many crafts including wood working and her cross stitching.  The family would like to thank Vancrest of Antwerp and their staff and Community Health Professionals and Hospice of Paulding for their excellent care and concern.
She is survived by three sons: Jerry L. (Diana) Neely, O.D. of Fairborn, Bruce A. (Saundra) Neely of Ada and Jack L. (Nancy) Neely, O.D. of Newark; seven grandchildren: Daniel E. (Lucy) Neely M.D., Andrew L. (Mary) Neely, Elizabeth (Jason) Snyder O.D., Christopher (Laura) Neely, Jennifer (Josh) Herndon, Anthony (Mai) Wedemeyer and Emily Neely; fifteen great grandchildren: Erin, Courtney, Rachel, Alex and Gabi Neely, Logan and Rylan Snyder, Seth, Rebecca, Thaddeus, Matthew, David and Noah Neely, Jasper and Neely Jo Herndon.
She was preceded in death by a great grandson, Jonas Allen Neely; a brother, Giles Budd Beiderwell; two sisters: Maxine Parrett and Marybelle Crosby.
A funeral service will begin at 12:30 PM on Saturday, July 12, 2014 at Antwerp United Methodist
Church, 202 East River Street, Antwerp, Ohio with Pastor Michael Schneider officiating.  Burial will be in Maumee Cemetery, Antwerp.
Visitation with the family will be prior to the service from 11:00 am to 12:30 pm on Saturday, July 12, 2014 at Antwerp United Methodist Church, 202 East River Street, Antwerp, Ohio.
In lieu of flowers memorial contributions may be made to Antwerp United Methodist Church, 202 East River Street, Antwerp 45813.
Condolences may be expressed at www.hansonneely.com

To order memorial trees or send flowers to the family in memory of Ruth L. Neely, please visit our flower store.