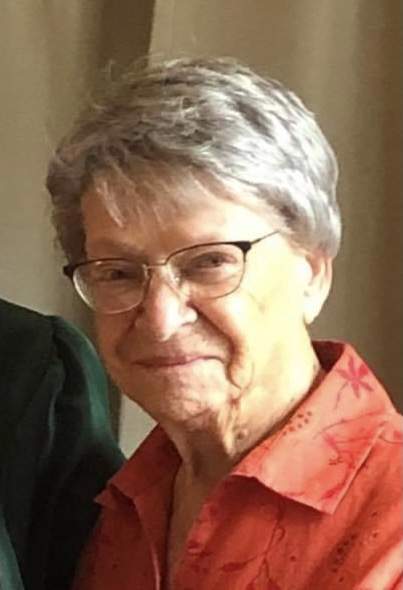 Shirley Jane Anderson DeLong Shull, 93, of St. Joe Indiana passed on Monday, December 21, 2020 at her daughter Martha’s residence. Born in Antwerp, Ohio, on June 1, 1927, she was the daughter of the late Samuel Nelson Anderson and Edith Catherine (Bickhard) Anderson. She was preceded in death by her first husband, Cleatus William DeLong (1955), second husband, Richard Charles Shull (2008), sister, Lois Fleck (2010) and daughter, Beth Keller (2016). She is survived by her children, Cleatus Catherine (Ivan) Sherman of Noblesville, Indiana and Martha Jane (Melvin) Steury of St. Joe, Indiana; seven grandchildren, Lonny (Shiryl) Meyer of Danville, Brian (Peggy) Meyer of New Haven, Scott Keller of Fort Wayne, Jan Keller (Zach) Hulbert of St. Joe, Megan Keller (Kurt) Lehman of Fort Wayne, Mark Steury of Fort Wayne, Ben Steury of St. Joe, and step-grandchildren Cyndi (Mike) Renn of Plain City, Ohio and Nancy (Mike) Ireland of Lafayette; 16 great-grandchildren and four great-great grandchildren. Shirley grew up in Antwerp and graduated from Antwerp High School. Her mother, Edith, worked at the Bee-Argus newspaper and Shirley could be found there helping with linotype. She also worked in Washington, DC as a file clerk, at GE and also Wayne Pumps in Fort Wayne, Indiana before she became a homemaker raising three daughters and helping her second husband, Richard, on the farm. In her spare time, Shirley was a voracious reader and accomplished bowler participating in dozens of leagues and tournaments. When she was no longer able to join her bowling pals at the allies, she became a master at Wii Bowling, rolling nearly 200 perfect games. She was an amazing seamstress and used her talents to sew anything from curtains to clothes, to stuffed animals, and in her later years she sewed clothes for missions in Africa and blankets for local charities. She loved watching sports, especially when it was one of her grandchildren or great-grandchildren at the local ball diamond, a nearby bowling tournament, volleyball, soccer, or basketball game. She was also passionate about the Indiana Hoosiers and Indianapolis Colts, and watched Jeopardy every chance she got. She received her 50 Year Member Pin in the Order of Eastern Star – Spencerville, IN Chapter. Per her wishes, there will not be a service or memorial. www.dooleyfuneralhome.com

To order memorial trees or send flowers to the family in memory of Shirley Jane Shull, please visit our flower store.