In 1857, Schilb & Sons Furniture & Undertaking was established in Antwerp by Andrew Schilb. Upon Andrew's passing, his wife, Margaret attended Boston's Egyptian School of Embalming and became the first female licensed embalmer. Margaret was not the only one to make history in her family. Olive Schilb graduated from then the Cincinnati College of Embalming.

The family profession was passed through the generations from J. Ray and Robert to Andrew J. III and Tom from 1945 to 1961. During this time, they also operated funeral homes in Woodburn, Indiana and Paulding & Hicksville, Ohio. Tom's son, Walter, worked with his father until taking the reigns himself in 1968.

Walter was the last Schilb to own the funeral home transferring it to William & Sandra Pauley in 1978. The Pauley's served the community until 1993, when Shawn & Michelle Dooley moved to Antwerp from Philadelphia.

Shawn & Michelle are proud of the funeral home's unique heritage and proud to be a part of the Antwerp & Payne family. 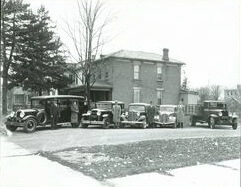 The Schlib Family & Funeral Home
circa 1930

As our community is taking steps to deal with the coronavirus (COVID-19) and as a critical service provider, we have prepared information to help you through this process.